To anyone who comes by, I don't really use this account for anything but a couple of LJ communities and occasionally drafts.

Children of her type contrive the purest philosophies. Ada had worked out her own little system. Hardly a week had elapsed since Van's arrival when he was found worthy of being initiated in her web of wisdom. An individual's life consisted of certain classified things: "real things" which were unfrequent and pricelss, simply "things" which formed the routine stuff of life; and "ghost things," also called "fogs," such as fever, toothache, dreadful disappointments, and death. Three or more things occuring at the same time formed a "tower," or if they came in immediate succession, they made a "bridge." "Real towers" and "real bridges" were the joys of life. and when towers came in a series, one experienced supreme rapture; it almost never happened, though. In some circumstances, in a certain light, a neutral "thing" might look or even eventually become "real" or else, conversely, it might coagulate into a fetid "fog." When the joy and the joyless happened to be intermixed, simultaneously or along the ramp of duration

Alison (as mentioned above) Janney!

Many other people, I don't know!

I grew up in a very conservative Mormon military household in San Antonio, Texas. I knew from the age of six what people would call me if they ever discovered my “secret.” Faggot. Deviant. Sinner. I’d heard those words ever since I can remember. I knew that I was going to Hell. I was sure God did not love me. It was clear as day that I was “less than” the other kids, and that if anyone ever found out about my little secret, beyond suffering physical harm, I would surely bring great shame to my family.

So I had two choices: to hide — to go on a Mormon mission, to get married and have a small Mormon family (eight to twelve kids) — or to do what I’d thought about many a time while daydreaming in Texas history class: take my own life. Thankfully, there weren’t enough pills (fun or otherwise) inside my Mormon mother’s medicine cabinet, so I pretended and I hid and I cried myself to sleep more Sabbath nights than I care to remember.

Then, when I was twelve years old, I had a turn of luck. My mom remarried a Catholic Army soldier who had orders to ship out to Fort Ord in Salinas, California. There I discovered a new family, the theater. . . and soon, San Francisco.

That’s when it happened. I was almost fourteen when I heard a recording of a speech. It had been delivered on June 9, 1978, the same year my biological father had moved my family out to San Antonio. It was delivered by what I was told was an “out” gay man. His name was Harvey Milk.

That moment when I heard Harvey for the first time . . . that was the first time I really knew someone loved me for me. From the grave, over a decade after his assassination, Harvey gave me life. . . he gave me hope.

The entire article is up at Towleroad - it's long but it's worth it!

The pictures are from Vogue Hommes, also via Towleroad. Gus Van Sant took them. 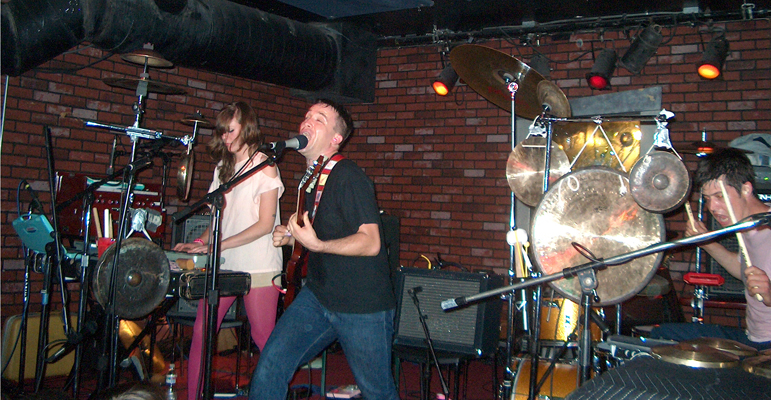 Saturday night I caught the final night of Xiu Xiu's current tour. I've loved this band since Knife Play but this is the first time I've managed to catch their show. It was good! Jamie Stewart rocked out like a rocker, which I was not really expecting.

Source: my camera and my blog, where there are fifteen additional photos

Next show up: Fleet Foxes this Friday at The Independent

I'm never sorry when I take a chance on going to the Bottom of the Hill on spec. The sound is so good, unlike certain other small SF venues (Slim's, I am looking at you) that even just decent bands make a good impression.

On Saturday I didn't have to settle for a just decent band -- The Octopus Project was dynamite. I should have become a much bigger fan much sooner, but the little ripple of hype with the release of Hello Avalanche last year mostly passed me by. Well, having seen them live, I'm a confirmed fan now. 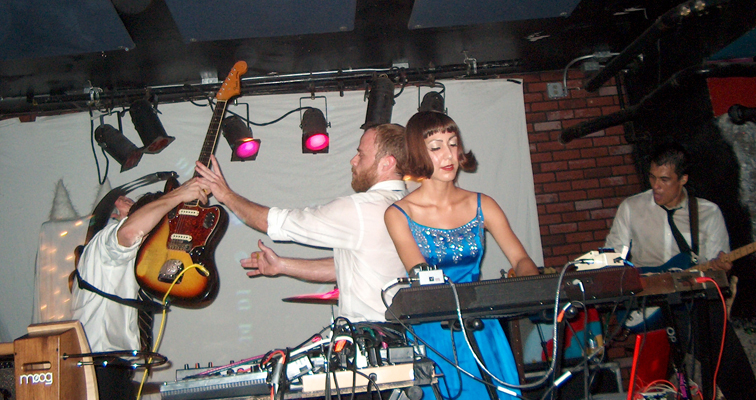 Source: my awesome blog, Distingué Traces, which has lots more pictures - so many pictures, in fact, that I am realizing I need to start using some kind of gallery widget. What should I use?
Collapse